Excellence is not accomplished through complacency and mediocrity.

We can do better.

A picture can be worth a thousand words.  (All of our graphs use independent, third-party information provided by Statistics Canada, the City and its annual audited financial reports: see our Data Sheet.)

Corporation of the City of Red Deer Operating Expenses 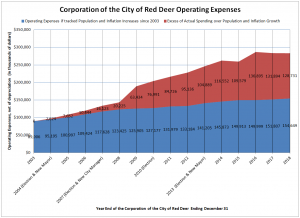 Our City is failing to bring its spending under control commensurate to the challenging financial realities faced by many Red Deer taxpayers.

We should be able to expect our City to hold itself to similar standards of financial stewardship and responsibility as expected of taxpayer businesses and households.

When our City strives for excellence in its responsible use of taxpayer dollars, it makes it easier for individuals, families, and businesses in our community to do likewise.

With more careful and wise use of taxpayer dollars, the City would have both more resources to make strategic capital investments which would improve the quality of life in our broader community while enabling taxpayers to pay substantially less in property taxes.